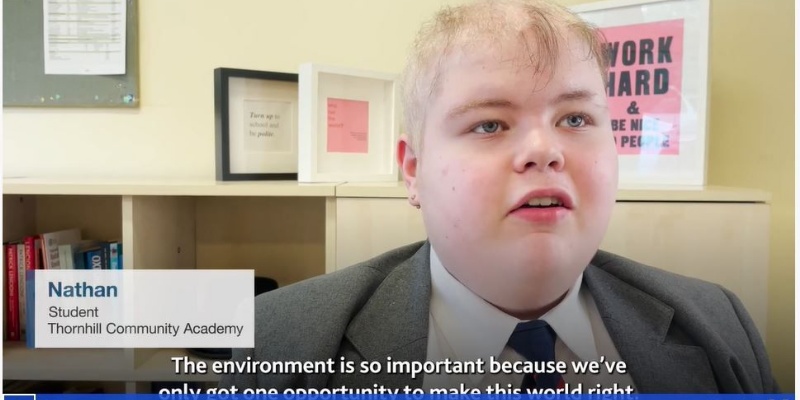 We were extremely delighted to be selected by the Government for our students to take part in a film for the global climate change summit at COP26. Headteacher, Mr Burton and three of our students worked with the Department for Education on the video, which promotes the importance of the new National Education Nature Park.

This enables schools, colleges and nurseries to identify pieces of land within their grounds and use them to improve biodiversity, such as through planting and growing trees and plants.

The initiative will create new wildlife habitats and help students learn about the importance of nature and a balanced eco-system.

Schools which do a particularly good job could then win a Climate Leaders Award, celebrating and recognising their work in sustainability and nature.

Mr Burton told us: “A Climate Leaders Award would have a huge impact on having that real drive and inspiration for young people to get involved in the climate even more so than they already are. Because any common misnomers regarding children and young people not caring about the environment, the planet and the world they live in are completely wrong. They do, they are passionate and they want to make genuine differences.”

The film was showcased at COP26 in Glasgow, with the Secretary of State for Education, Nadhim Zahawi, in the audience. Prime Minister Boris Johnson and US President Joe Biden were among the many world leaders who attended COP26. The film clip lasts for just over 3 minutes and can be viewed here.